I've been doing a bit of sewing for my little guy lately. This is the backpack I made for him to take to school. It's fully lined, and it's got just enough space for a change of clothes, his activity books and his colour pencils.

This is the top of the bag. I don't know if you can see from the picture, but there are three loops there. Two are for the straps. Originally the plan was to thread the straps through the loops, fold them over, then sew them down. I put the bag on my little guy and just knotted the straps to get the right length. The knots held so well that I've never gotten around to the sewing. I almost didn't put in the third loop, but now I'm glad I did. It's perfect for hanging the bag on a hook.

I have a beautiful piece of pink cloth that I'm itching to turn into a bag for my little lady, but putting in that covered zipper caused me quite a bit of hair pulling. I'm not going to attempt another bag until I've figured out a saner method of inserting a zipper into a lined bag.

Here's the new 'baju melayu' (traditional Malay clothing) I made for my little guy. Yes, it's pink. He chose the colour himself. He's a sweet guy. Once, I put some ribbon flowers on his sister's dress. I had some extra flowers, so he requested that I put them on his pants. I put them up near the waistband, hidden by his shirt, so it wouldn't cause too much teasing at school.

I haven't made a 'baju melayu' for my little guy in a while, so I decided to do a 'tulang belut' (eel spine stitch) on the neckline. This stitch is a feature of traditional 'baju melayu'. It's a decorative stitch which also helps to strengthen the neckline. It's kind of like a herring-bone stitch lying on its side.
Mine isn't as even as it could be, for a few reasons. Firstly, I don't practice it enough. Secondly, I cheat. As you make the stitches, you're supposed weave them over and under each other. I cheat by doing the stitch correctly, but omitting the weaving. It speeds things up a bit.

After all this little boy sewing, I feel a bit guilty. The little lady needs clothes too. I have to get moving and plan some dresses for her.
Posted by Unknown at 8:59 PM No comments:

Email ThisBlogThis!Share to TwitterShare to FacebookShare to Pinterest
Labels: sewing

When I was looking for the crepe paper iris pattern, I saw an article for quilling. I couldn't resist, so I made these little uglies. 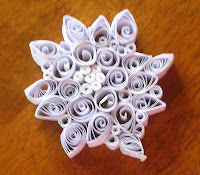 As usual, I neglected to read instructions carefully, so I cut 1.5 cm strips instead of the usual 3-5mm. The result is way too bulky.

These picture frames were next. For the black and pink frame, I had planned to do the white scrolls all the way around, but my little guy (my son) got involved. The big red ... roses? ... on the right are his idea.

The last paper item for the day is this little Kusudama ball, design selection and phtography courtesy of my little guy.