I live in jeans, and as a result, I have quite a lot of old denim. So I thought I'd make a frayed denim blanket. Making it was harder than I thought it would be. I've never tried to handle that much weight through a sewing machine, and putting in that last row took some wrangling. Thank goodness for my mother's beautiful old Bernina. I'm glad I decided to offset the rows instead of doing a grid. If you tried to match the seams, you'd have to sew through 8 layers at each seam. With an offset setting, there are only 6 layers.

Fraying the seams caused me quite a bit of anxiety. It took me over a week to cut all the seams. I tried everything, scissors, clippers even electric scissors. The scissors could barely cut through the cloth. The clippers worked, but only through two layers. So, it took two passes to finish a seam. It took forever, it hurt my hands, and I got bored. The electric scissors were the most comfortable, but they kept slicing through the stitching.

In the end, the easiest was to use a simple blade cutter. I put the seam on a chopping board, then hacked at it with the blade. It still hurt the hands, but it was quick and strangely satisfying.


After cutting the seams, the blanket went through a wash and dry cycle at the laundromat. There aren't many self service laundromats in my area, so even that was a bit of a challenge. I got a funny look from the girl in charge of the dryers when I pulled all the fluff out of the machine.

Here's the blanket before and after washing. The seams did fluff up nicely, but I don't think the effect is worth it. Too much effort. Next time, I'll find something else to do with my old jeans. 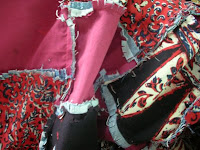 Posted by Unknown at 1:36 PM No comments: