Motif 23 - 25: Finishing with the Malaysian tatters

Last Saturday the Malaysian Tatters had their second meeting.  Jon Yusof is the group's founder and she has a lovely write-up about it here.  The stars and my kids' various activities aligned so that I could actually come, so I put all my tatting in a box and went.

It was fun sharing tatting tips, and seeing other people's work.  There were all sorts of tatters; new ones, intermediate ones and tatters who had been tatting longer than I've been alive.  Zarina and Jon generously spent their time showing people the flip.  Jon even had an excellent little booklet teaching how to tat in Bahasa Melayu.

I brought Jane Eborall's goat to work on, but neglected to bring a full printout of the pattern, so had to stop half way.  Then I worked on another forever doily, making many mistakes, while eating, browsing other people's books, buying HDT, and generally confusing people with the many ways there are to tat.

There are two things I want to remember from the event.  The first is that I'd like to try slowing down a little.  I'm not unhappy with my tatting.  I love the flow of making stitches and sometimes it makes me sloppy.  I think that's OK, but looking at Jon and Zarina's neat stitches, I think I'm going to find a really nice pattern, then take my time working neatly through to the end.

The second is that I want more 6-ply!  I don't have much in my stash because until a few years ago, I didn't have access to any, but looking at all the lovely thread people brought, I think I'm going to get a bit acquisitive.  It was great fun, but I don't have any pictures.  I find it very hard to be present in an activity if I'm taking pictures, so in general, I just tried to enjoy the moment.

I've always been a 'Lone Ranger' kid of crafter so I was quite and nervous to go to the meet.  I burned off the nervous energy by finishing and blocking some bits of tatting to go into my tatting box.  Those bits were the last motifs of my second round of the 25 motif challenge (late as usual).

Here's the first one.

This is the Riego grapes bookmark, as interpreted by Martha Ess.  The grapes are tatted using a needle (not needle tatted, but using the needle like a shuttle).  It's a fiddly process, but I think it's worth it.  Look at those little grapes, with all the colours shading one into the other.  So cute. 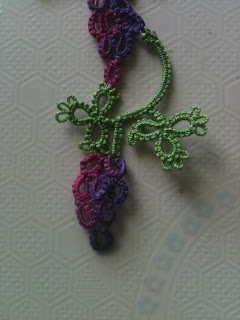 The next one is the 'Beaded Jabot' from Yusai Shokoin's 'Tatting Ideas' book.  I call it the 'Questionable Jabot' because it raises many questions:-

QUESTION 1: What is a Jabot?
According toWikipedia, a jabot is a sort of neckwear, worn in 17th and 18th century Europe.

QUESTION 2: What is a 17th century clothing item doing in a modern book of Japanese patterns?
Wikipedia has no answer for this, but it makes me wonder about Japanese sensibilities....

QUESTION 3: Why was my t-shirt and jeans wearing self compelled to make a jabot?
It was the beads!  The beads drove me to it! 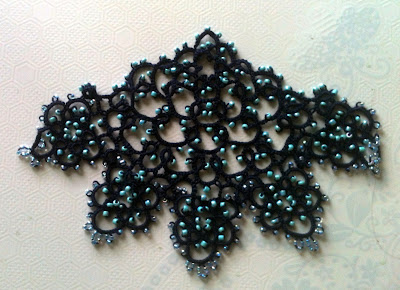 The last one is the lovely Flora butterfly from Adelheid Dangela's 'Tatted Butterflies' book.  I read somewhere (sorry, can't remember where) that those solid tatted shapes are called 'leaf structures'.  So, in honour of the name, the butterfly is a light leaf green.  It looks refreshing this way, but perhaps it would be cuter with more colours. 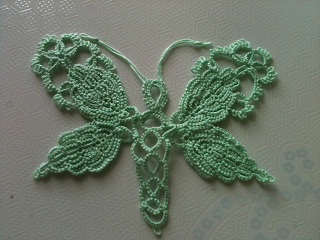 This morning I realized that it was Valentine's day.  I have some tatted hearts, and yesterday would have been a good day to show them.  Still better late than never.

The first heart is Tatman's 'Modern Heart', done in DMC 20.  The inward facing picots are straightforward, but I had to keep reminding myself not to flip the around. 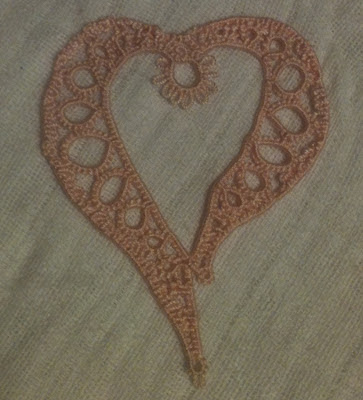 Next are the is the Sweetheart earrings from the Yarnplayer's Boutique Tatting book, done in DMC cordonette 20.  These were an easy tat, and a great way to make use of my bead stash. 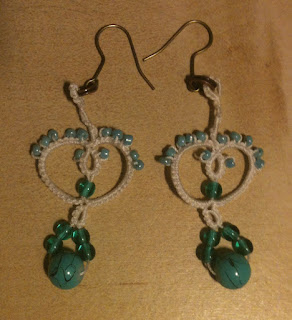 These are blue hearts, which I think is appropriate for today.  Today, the internet tatting community is full of sadness for the passing of the Tatting Goddess.  I did not know her personally, but I learned a lot from her web pages when I first started tatting seriously years ago.  Thank you Tatting Goddess.

This is the second motif in my set of seven tatted blobs.  This one is the 'Sahmura' snowflake from Jon Yusoff's Elegant Tatting Gems.  This design reminds me very strongly of the traditional Malay accessories my grandmothers had, all swirls and negative spaces. 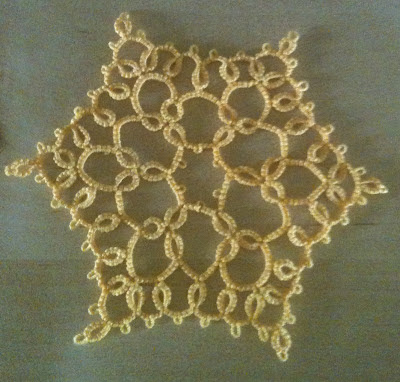 I wish I had pictures to show, but most of the pieces have been lost in time.  Here's a picture from the Malaysian Tourism site, although my grandmothers had simpler more utilitarian stuff.

It makes me wonder if the snowflake could be tatted in fine gold thread, then stiffened, so it could be a brooch.  Hmm, time to google for 'gold thread'.
Posted by Unknown at 7:04 PM 1 comment: